TRADING MACS FOR GLOCKS: A Twisted Vision and the New Frontier

We’re trading in our Macs. We don’t need them anymore.

Trading our laptops too. We have thwarted the nascent rise of iPads. Now. Before they become too familiar.

I mean, what good is digital literacy if some sinister shadow drops in out of the sky to shoot up the school. And we all know it happens. We all feel that sense of dread lingering, remotely familiar, like the acrid cloud of cafeteria food prepped daily for a thousand kids. We all read the headlines:

Duncan: You Can’t Teach Kids Scared Of Being Killed

The School Where Nearly Every Student Has Experienced Gun Violence

Our fences cannot rise any higher and still stand against the wind. We have rows of metal detectors. Our children remove their shoes for inspection as if they were boarding an airplane. They know the drill. We scope their pockets and their backpacks. We x-ray their intent. They are each sworn daily to refrain from brandishing arms. At least in any menacing way. It is our new and collective oath of allegiance to protect one another from mutual annihilation.

We are America’s most innovative school. We are widely renown as the first in any line of early adopters. First to be wired. First to go viral. First to poke holes in the internet firewall. We used to camp out for iPhones but we can’t afford dual priorities: upgrade learning technology or arm to the teeth?

So we invest in the latter. Once secure in our conviction that Macs were superior to IBM’s, we now know what we know: Apple expenditures are so pre-Newtown.

So we have glocked up. Every kid. Every teacher.

We ripped out the fitness stations that lined our running track and installed target shooting pods. They are creative. Colorful. They lend themselves to seamless integration of the so-called 21’st Century Skills– to which we have now unilaterally added: “Mastery of Firepower.”

Our students may be prone to childhood obesity and Type II diabetes, but they can freakin’ shoot. And besides, are you going to be the one to tell them they are fat?

Our “Gun Free Zone” is the registration counter, where in exchange for enrolling here you get your guns for free. (Ammunition clips are provided at no cost– however, any modifications are subject to the discretion of individual families.) Frankly, I worry about that policy. In the name of equity, is it fair that some families can afford state-of-the-art ammo packs while others can not? Are we perpetuating another national divide of “haves” and “have more pop”?

Of course, without trained teachers, what good is an entire student body strapped to their sidearms?

So on minimum days we target and crouch and shoot and load and afterwards debrief. There’s a lot of peer coaching. A lot of self reflection and goal setting. We feel morally obligated to out-shoot the kids.  And so we do.

As of late, we are frequently invited to present break-out sessions at state and national conferences: “Shooting Straight:  How Schools Can Target the Real Common Core Priorities.” And: “The New Literacy Standards: How Guns at School Somehow Sharpen Everyone’s Listening and Speaking Skills.”

This year we intend to run a booth when ASCD merges with the NRA at the the national gun show in Las Vegas.

And while our academic metrics have virtually imploded, our kids and our staff generally feel good about themselves. We feel like pioneers of the old west. Revolutionaries. And we feel safer in the bargain. Sort of.

Now that we have a baseline established, we can afford to debate whether glocks are enough. We are nothing if not professionally diligent. We are an ever-visionary and forward thinking lot:

“What if Sunnyside arms their kids with higher caliber weapons?”

“How do we keep up with the inevitable modifications and weaponry upgrades– say…Glocks 2.0.?”

“If we hire a sniper coach, where should we place him or her on the salary scale? And would she have to be credentialed?”

“What happens when we discover that we’ve been  left behind in the arms race?”

Taken together the questions are chilling. Where’s the leadership?

So I sidle into my office and remove my firearms as I sit at my desk to Google updates on best practices. I reach for my laptop when I am reminded– that we traded our technology for glocks.  It’s gone. 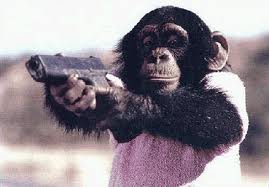