ONE RAINY CHRISTMAS DAY WE MAY DISCOVER OUR GIFT

And how we might be even more effective when we return to school in January if we can continue to recognize the many ways that children can be gifted. Or intelligent.

And how we so casually recite the 7 intelligences as if we were naming the days of the week or Disney’s dwarfs: verbal, mathematical, spatial, musical, interpersonal, Saturday, intrapersonal, kinesthetic, Grumpy, Sneezy, Dopey…

And then on this rainy Christmas Day when I should be playing with my daughter’s new PSP I am instead reflecting on my students and my colleagues and my family and what a collective gift they are to me….

And so, for the moment, I resolve to seek the gifts we find in others and continue the journey to wherever the spiritual intelligence might take me…

And I wonder where your gifts have taken you.

WHY “GENERATION WE” KIDS INSIST ON DESIGNING THEIR OWN TATTOOS

So is it me? Or have we somehow managed to reduce their brilliance to the rather narrow band of competencies once considered appropriate for 19th century prairie schools?

They are, after all, judged in our schools on their ability to select one pre-ordained “correct” answer from a list of 4 possible choices on sterile and standardized tests designed independently by each state. States which, by the way, get to test whatever they want to test as long as they test that which is valued by one very onerous and unfunded mandate called No Child Left Behind.

The education of Generation We has in effect been reduced to basic skills in reading, grammar rules, math, and test taking. In response to the accountability and testing movement, we have regressed toward a narrow curriculum once quaintly defined in one-room prairie school houses as the “3R’s”: readin’, ritin’, and ‘rithmetic. (At least ritin’ requires thinkin’. ) Now the curriculum focus is defined by W.O.T.T! What? What’s On The Test. As in…”Today, class, we will study whatever’s on the freakin’ test”!!!!!

But if we are still capable of learning anything we should have learned by now that one of the defining characteristics of Generation We is that they are not going to be pigeon-holed in percentiles and proficiency levels.

Keenan is a perfect example. He is not particularly strong in ‘readin’, ritin’, or rithmetic”. But his short term and long term memory is so acute he memorizes song lyrics the first time he hears them. He masters technology the moment he touches it: cell phones, laptops, I-pods, video games. (I wonder why they even bother to print owner’s manuals and directions any more… Gen-We kids don’t use them!) 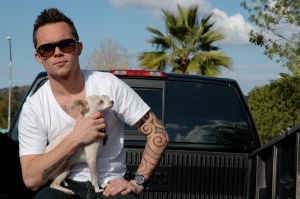 And he is a walking billboard for Avalon Tattoo in Pacific Beach. He is running out of space on his otherwise beautifully sculpted body to permanently ink icons or sayings or cryptic celtic designs. He designs is own tattoos because he can. It is his body and maybe after 12 years of captivity in someone else’s definition of art and literacy his designs are liberating. At one time he might have passed as an anti-social biker or a carnival ride operator or an island warrior. Today, his Facebook page has hundreds of “friends” from all over the world–most of whom have liberating tats of their own!

Throughout his school experience he was warned that he has to score Proficient on the California Standards Test and pass the High School Exit Exam or he’ll be doomed to a lifetime of failure. What does a tech-savvy, socially connected, Generation We kid with a superb memory and a willful defiance of traditional school norms do with his life when he grows up and struggles with the “readin’, ritin’, and rithmetic'” that we told him was so important?

He becomes fluent in American Sign Language. It comes as natural as new cell phone protocols. He remembers every gesture and symbol from the instant he learns it. He has mastered a skill set that he can actually use in the service of others; a vocation that is not tattoo-aversive.

Seems like we could learn from kids like Keenan that our schools should not be designed by educrats obsessed with the prairie grass that they see waving in their rear-view mirror.

Now let’s see. How do you “sign” the word Gifted? It’s not on the test.