My father was a  member  of the “greatest generation”.  Salt of the earth.  Bright.  Self-educated.  A patriot.  As an officer of the United States Navy he saw action in both World War II and Korea.  He was on the blockade in the Mediterranean when Krushchev’s missile-bearing fleet tested JFK’s courage.  All those brave Americans from Massachusettes and from Camden… and not one of them blinked.  And so Russia was turned back and it was the beginning of the end of the USSR.

My father’s service to his nation was not provided for political purposes or jingoistic calculation.  He served with honor.  I would never want anything that I say or do denigrate his record, or his service.  Or his memory.

However, I was stunned by an article that appeared in several publications this week, including Education Week.

It seems as though the role of our schools is now to prepare our children for the military.

A new report from an organization called “Mission Readiness: Military Leaders for Kids“ states that the United States “should invest in early education to help bolster the number of young people eventually eligible to serve in the military and protect national-security interests.”

On Thursday, Nov. 5, the generals and admirals of Mission: Readiness, along with US Secretary of Education, Arne Duncan, released a new report that details the fact that 75% of young Americans are unable to serve their country because they have either failed to graduate high school, engaged in criminal activity, or are physically or mentally unfit.

How do you read that?

Is fitness for the military the new bar by which our children will be measured?

Clearly these goals are compatible with service in the military.  And the veteran officers have rightly pointed to juvenile crime, high school drop-outs, and childhood obesity as conditions that compromise America’s future on every level.  They are advocating that Congress pass a bill to provide more funding for early education- an urgent  need in so many communities.

“Human capital is the success this country is going to need for the 21st century,” said retired Army Maj. Gen. James W. Comstock.

Human capital?  Is that who we are teaching?

I’m sorry.  I work among children and teachers every day.  I watch them struggle and learn and compete and sometimes even cry together.  Those whom an Army general would refer to as “human capital” have names and faces. 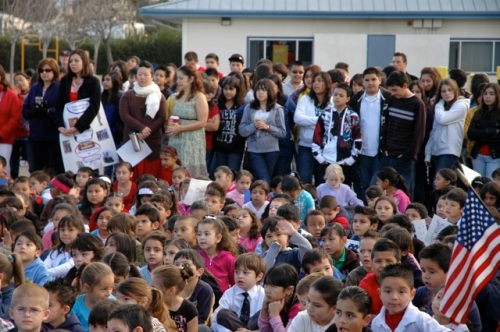 In good conscience, how do I prepare those children for military service;  for interminable war that even our President cannot comprehend; for the ultimate sacrifice that soldiers and sailors are asked to make in shadowy lands… against faceless enemies.

The truth is, the armed forces will continue to draw the best and  the brightest as they always have.  They will attract the likes of Patrick Tillman. And my father.  And all his brothers.  And all my mother’s brothers too.  And my own brothers.  And all those souls for whom we will pause and remember on this coming Veteran’s Day. They will attract them when the cause is right and when they are led by their own sense of duty and patriotism.

Perhaps modern military warfare– 21st century warfare– will one day reach a point where killing other people and depleting the “human capital” of our enemies, is no longer the objective.  When our military is dependent solely on brain power– on technologically sophisticated kids who can solve problems and think critically and creatively to insure our freedom through statesmanship and diplomacy– then turning to our public schools to prepare students  for military service will be an objective worthy of our father’s sacrifice.

3 responses to “CHILDREN GROOMED TO SOW OUR FATHER’S PEACE”