Monday, September 21st, is the United Nation’s 27th annual attempt to promote an International Day of Peace.  We are asked to pause and reflect.  Or perhaps set aside our personal or political anger.  To cease fire.  For one day.

We are asked to inspire our students to celebrate this day of peace in their own way.  And perhaps we should.  Maybe the adults ought to all just chill for 24 hours.  Maybe we just take a break from spewing venomous hate speech at Town Hall Meetings or calling the President a fascist or the second coming of Pol Pot.  Maybe we ought to quit shouting across the great divide:  “You Liar!”  You racist!

Maybe on International Peace Day we stay in our seats when we might otherwise rush the stage and yank the microphone out of some 19-year old entertainer’s hands to promote Beyonce.  Maybe we accept the line judge’s call instead of threatening to shove the “f-ing tennis ball down her throat”.  Maybe we disarm.  Maybe we turn down the volume on our talk radio stations. Maybe we have a civil discussion without a deer rifle slung over our shoulder.

Maybe we make this International Day of Peace about our kids.  Before someone gets hurt.

Last week the House Speaker warned that the climate of hatred towards the President is starting to feel very much like that of San Francisco in the late 70’s– when Dan White’s voices urged him to murder city councilman Harvey Milk, a gay rights activist. She was immediately vilified.  Her political adversaries accused her of encouraging Americans to assassinate the President.  But all week long cable news pundits were saying the same thing:  that we are witnessing a zeitgeist with potentially frightening consequences if some nut gets too close to those in power who were elected by the “people”.

On this International Day of Peace,  a ceasefire in Afghanistan and Africa and Iraq and the West Bank and in the border towns of Juarez and Tijuana would be a blessing.

But I’ll settle for a day in which our children are permitted a moment to lend their voices to the tumult– their prayers for peace.

So at El Milagro we will commemorate this Day of Peace.  And I’m sure we’ll hear about it.  We’ll hear that we should be using our instructional time more wisely and preparing our kids for the standardized tests.  Or that we are putting ideas into their heads.  Or we are teaching them to be soft.  Or to be socialists. 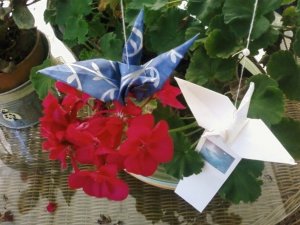 But the 7th and 8th grade students in Mr. Medina’s class have already made 1000 origami cranes and inscribed them with a wish for peace.  They will wear white to signify their solidarity.  And they will lend their voices by vowing to keep a day of silence.

Each student will carry a Pledge Card that says:

•Today I am silent.

•Today I am silent… reflecting on peace within myself.

•Today I am silent… reflecting on peace within my family, my school, my community, and the world.

•Today I will walk in silence with my classmates and we will stand for peace.

•Today I am silent… for the last time!

•From this day forward, I will raise my voice in defense of others.  I will be an advocate for peace, non-violence, and justice for all people.

By Tuesday the International Day of Peace will be over and we will not likely have effected any real change in the world.  At least for now.

There are still 1000 origami cranes.  The wishes they bear will be released to the universe.  The prayers they carry will have come from our children. 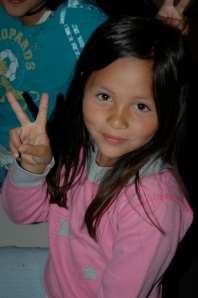 The lines draw to the heavens today… and I am paying attention.

The Space Shuttle Discovery has ascended into orbit after long last, carrying the hopes of NASA– but also the son of migrant farm workers. Jose Hernandez picked cucumbers in Stockton as a child. Today, he is among the Latino community’s most distinguished members, circling our planet as an astronaut on his first tour in space.

And yet, at the exact same moment, our nation celebrates the life of the very senator that made Jose Hernandez’ journey possible. The Lion. Asleep now to us and for the moment surrounded by our nation’s most powerful leaders, he is bound for eternal rest with his two brothers. These Kennedy’s were my family’s patron saints. They were the source of my idealism. In their quest to pave the way for sons of farmworkers and daughters of former slaves, they changed the face of our nation. They compelled us all to live our lives in the service of others.

Senator Kennedy fought for heath care and education, social justice, and the journey of the poor. He survived the tenure of 10 presidents, beginning with his own brother’s. In over 4 decades of political battles, he wrote over 1000 laws and bills so that the civil rights of all Americans might come to full fruition. He stood for our nation’s defense. And world peace.

He fought so that there would one day be a seat on rocket ships for the likes of Jose Hernandez and the children of El Milagro. And like his brothers before him, his passions were crystallized in the Catholic tradition, as if Jesus himself approved. And he surely would.

In his passing, the media has focused intently on his life. The good and the bad. The public giant, the private man. The triumphs– and the darkest hours inevitably shared on a bright bright stage. The long march to Arlington behind the riderless pony and our fallen President. That amazing euology for Bobby that has echoed for 40 years. The one that inevitably tantalizes us to pause in deep reflection, to think– if Jack and Bobby had lived a full life… what might have been.

Images of my childhood.

My own father passed in 1986. My mother just two years ago. Today would have been her 85th birthday. She would have sat in front of the television like she had for all the Kennedy funerals, rosary in hand. Holding on to her emotions until the floodgates opened with the “Ave Maria”. Tears streaming for Irish patriots.

The symbolism and powerful metaphors would not have been lost on her. The Latino astronaut circling above. The new President delivering another eulogy for the ages. Young. Handsome. African American. Beneficiary of all those who came before to pave a road, however narrow, toward real equality—but especially Ted Kennedy.

To tell you the truth, I’ll feel better when the Discovery and our new President are safely home. There is risk in soaring. No one knows that better than this noble family. But of course, our greatness comes only from those willing to rise above the expectations and the odds, above the bigots and the small minded… above the politics and the fear.

There is less celebration here on earth today than there is in heaven. The last brother has made it home. He said of Bobby:

“My brother need not be idealized or enlarged in death beyond what he was in life. But to be remembered simply as a good and decent man, who saw wrong and tried to right it, saw suffering and tried to heal it, saw war… and tried to stop it.”

Today, all earthly powers have one eye on the heavens and the sleeping Lion. “But the work goes on. The cause endures. The hope still lives. And the dream will never die.”