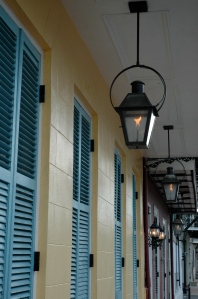 I thought Las Vegas was crazy, but it is nothing compared to the French Quarter in New Orleans.  Now granted, there are a lot more people in Vegas and you could fit the entire French Quarter in the lobby of one of the mega-casinos on the Strip… but you cannot deny the authenticity and music and culture of Bourbon Street.

I returned home this afternoon from the 8th Annual National Charter Schools Conference that was held in NOLA. While I was there, I learned some stuff about the Voodoo Queen, and Preservation Hall, and Cajun cooking, and an historic old city that has slowly risen from the destruction of Katrina.

I noticed that the local people talked about Katrina everywhere and I wondered if they are aware of how deeply scarred some of their neighbors are.  I overheard a young waitress tell a co-worker that she still feels traumatized and that she thinks she needs therapy.  Her co-worker just laughed at her.  “Try spending three nights on a bridge like I did.”

I think they both need therapy and they are not alone.  Virtually every article in the local section of the Times-Picayune this morning mentioned Katrina at some point: like the story about the lady who is suing a couple in Texas because they rescued her dog “Jazz” and now they don’t want to give her back.  During the crisis the Texas couple wanted to help so they agreed to be foster parents to displaced animals.  They took in Jazz, renamed her “Hope” and then got real attached to her.  Meanwhile, her original owner dried out the house, recovered what possessions she could and then started to look for Jazz.  She never gave up hope that she would find Jazz and bring her home.

The truth is Jazz probably doesn’t care what her name is or where she lives as long as it is with these humans that will go to extraordinary lengths to love her.  And as long as the floodwaters don’t carry her away again.

There is probably a metaphor in there somewhere to apply to the National Charter Schools Conference.  Or maybe not.

Maybe it’s enough to just say we can learn something, every day, about resiliency and post-traumatic stress disorder and how these events outside of school profoundly affect children. And maybe we should listen to our kids when they tell us that they are in crisis and that they hurt inside and they don’t even know why. ”After all,” the waitress said, “that damn flood happened three years ago!” And maybe when our dog floats away we should just go find her. In looking for Jazz…we might find Hope.

One response to “JAZZ BECAME HOPE”