MONET TO THE CHILDREN

Earlier this week my daughter stood in the very tracks of Claude Monet on the outskirts of Paris.  She took one look at the famous lily pond next to his house and declared that if she lived here– she would paint too. 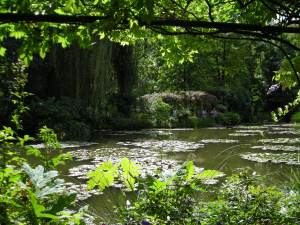 Do you get it?

My Kira, high school graduate from 21st Century, suburban San Diego, breathed in the air of Monet’s natural muse.  For the rest of her life she will understand who Monet was, and what he painted, and perhaps more importantly…why he painted.

The next time she takes a standardized test and stumbles across a random question about Monet you can bet she’ll get it right.  When she reads an excerpt from a New York Times article about how one of Monet’s rare waterlilly paintings called Le Bassin aux Nympheas fetched $80.4 million at Christie’s, she will hang on every word.  When a class debate rages on whether Monet would have been a better tagger than VanGough… she will weigh in with authority.

There is really no substitute for experiential learning.  Kira learned more in ten days about Monet, French culture, world travel, international politics, economics, and air travel than she learned in 13 years in the K-12 schools in which she otherwise excelled.

Perhaps this is obvious… particularly to those of us who have had similar experiences of real, authentic learning in the world.

What about kids who have simply not had very many authentic learning opportunities?

Kira’s pictures from the waterlilies remind me of how schools like El Milagro are obligated to somehow bring Monet to children if not  children to the Louvre.

2 responses to “MONET TO THE CHILDREN”