For years when my wife and I saw young kids riding skateboards down hills with no helmets, or bouncing off the side of cars to land their imaginative new tricks and impress their friends, we would shake our heads and mockingly refer to them as “brain surgeons”.

Then Christy sent us a link to an interview done by Tony Hawk for NPR.  I never put Tony Hawk in the same category as the “brain surgeons” because he seemed like an entrepreneur and a businessman more than a skateboard guy.  I don’t picture Tony Hawk getting up in the morning and practicing skateboard tricks.  How could he?  He is flying all over the world making movies and video games and marketing Tony Hawk skating gear.  But then I was struck by this quote:

“Although I have many job titles — CEO, Executive Producer, Senior Consultant, Foundation Chairman, Bad Actor — the one I am most proud of is ‘Professional Skateboarder.’”

It made me realize how important it is for kids to be encouraged to grow up and do the thing they love to do. 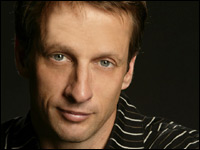 I have been a professional skateboarder for 24 years. For much of that time, the activity that paid my rent and gave me my greatest joy was tagged with many labels, most of which were ugly. It was a kids’ fad, a waste of time, a dangerous pursuit, a crime.

When I was about 17, three years after I turned pro, my high school “careers” teacher scolded me in front of the entire class about jumping ahead in my workbook. He told me that I would never make it in the workplace if I didn’t follow directions explicitly. He said I’d never make a living as a skateboarder, so it seemed to him that my future was bleak.

Even during those dark years, I never stopped riding my skateboard and never stopped progressing as a skater. There have been many, many times when I’ve been frustrated because I can’t land a maneuver. I’ve come to realize that the only way to master something is to keep it at — despite the bloody knees, despite the twisted ankles, despite the mocking crowds.

Skateboarding has gained mainstream recognition in recent years, but it still has negative stereotypes. The pro skaters I know are responsible members of society. Many of them are fathers, homeowners, world travelers and successful entrepreneurs. Their hairdos and tattoos are simply part of our culture, even when they raise eyebrows during PTA meetings.

So here I am, 38 years old, a husband and father of three, with a lengthy list of responsibilities and obligations. And although I have many job titles — CEO, Executive Producer, Senior Consultant, Foundation Chairman, Bad Actor — the one I am most proud of is “Professional Skateboarder.” It’s the one I write on surveys and customs forms, even though I often end up in a secondary security checkpoint.

My youngest son’s pre-school class was recently asked what their dads do for work. The responses were things like, “My dad sells money” and “My dad figures stuff out.” My son said, “I’ve never seen my dad do work.”

It’s true. Skateboarding doesn’t seem like real work, but I’m proud of what I do. My parents never once questioned the practicality behind my passion, even when I had to scrape together gas money and regarded dinner at Taco Bell as a big night out.

I hope to pass on the same lesson to my children someday. Find the thing you love. My oldest son is an avid skater and he’s really gifted for a 13-year-old, but there’s a lot of pressure on him. He used to skate for endorsements, but now he brushes all that stuff aside. He just skates for fun and that’s good enough for me.

You might not make it to the top, but if you are doing what you love, there is much more happiness there than being rich or famous.

So now Tony Hawk has the time and resources and motivation to do what ever he wants. And one of the things he chooses to do is direct the Tony Hawk Foundation— an organization committed to helping inner cities and low income communities build skateboard parks for youth.  To date they have built nearly 400 skateboard parks for inner city kids, from Compton to Athens, Georgia.

From diving off of park benches to changing the quality of life for thousands of children in communities all across America.  Not bad for a skater kid from San Diego.

The day my wife read the Tony Hawk interview she took his advice and fired off an e-mail to Keenan and Kira:

Dear Keenan and Kira: I am attaching a GREAT (and yes, short) article about Tony Hawk. I encourage you to read it. I will never call those skater kids “brain surgeons” again. Now, I’m not advocating that anyone go off and be a skateboarder for a living….there is a real message here about doing what you love.

Daddy and I were talking the other night about how much time we put into our work. We do it not because someone requires us to do it, but instead because we find our work truly rewarding. If someone were to ask me, what is your wish for your children, I would not say, super intelligence or physical ability or beauty….I would say, I hope my children find a partner who makes them happy every day, a job that is so rewarding they don’t dread Mondays and the character to always do the right thing. I think you guys are well on your way!

Find the thing you love.