SADNESS OF THEIR LEAVING US

I saw the sun set at El Milagro today.  The evening crawl.  Like the traffic that frames our western borders.  A limp, two-day old graduation balloon waved in a gentle evening breeze, still pulling at its navy blue tether that kept it ribboned to a building rail.  The truth is, even if we freed it now it would not have enough gas to fly.

And I can relate.

The 2008-09 school year ended in a frantic week of things to be done, and papers to sign, and questions without answers unless previous questions were answered first.  Students to place. Parents to assuage.

Three eighth graders posted a classroom rampage on You Tube and their parents argued that vandalism was relative and that it was simply ill-timed mischief and boys will be boys and and they had never been in trouble before and they had been at El Milagro for 9 years and relatives were coming from Mexico and anyway Tommy made them all do it.  And all the while I could seek the regret and deep sorrow in the students’ eyes.  Good kids.  Dumb prank.  And my mom was always right when she said “This is going to hurt me more than it will hurt you.”

Our Friday-Last-Day-Of-The-School-Year staff meeting featured teachers’ children and spouses and special guests.  And a salute to the six teachers who are leaving El Milagro.

The last day of school is no longer bittersweet to me.  There is no sweet.  It is too much ending and good-bye; to children who have orbited around me like silent moons for nine years.  Their names are sometimes not so clearly connected to their faces.  They evolve and change from 5 year-olds to 14 year-olds and in their graduation dresses they so suddenly cease to look like children at all.  But in any case, we weave a ceremony around them as if another rite of passage is necessary for them to leave us…  as if we can delay what the march of time has preordained… as if we could hold them back. As if we could hold them.

I am wired for the rhythms of daily school routines.  I awake to them even when I resent them. And in a blink they will start again… a new schedule with new kids in new jeans and new backpacks and new books handed out by their new teachers.  We will herald the 2009-10 school year as “the year” though for what we will never quite be sure.  And soon we will be so deep in it all again that these beginnings and endings will fade. And that is the daily routine. The weekly, monthly, yearly… life routine that soothes the sadness of their leaving us.  Again. 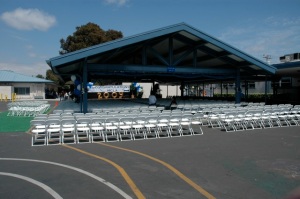