Corporate CEO’s and forward thinkers like to use the Wayne Gretzky analogy.  Gretzky scored 940 some goals in his 20 career in the NHL.  But he never skated to the puck in order to take his magic shots.  If he skated to a hockey puck angling off the boards at 100 mph, it would be gone by the time he got there.  So Gretzky was as good as any hockey player that ever played the game… at skating to where the puck was going to be.

So in light of the Wayne Gretzky analogy, this week’s lead story in TIME Magazine is reassuring.  California, it seems, is not falling off into the Pacific Ocean after all.

Oh sure, there are earthquakes and wildfires and crazy environmentalists chaining themselves to the railroad tracks in defense of the ecosystem.  There are gangs and home foreclosures, long unemployment lines and long lines at the frenzy-producing freeway merge.  There may be shuttered businesses and legions of workers whose origins are driving Lou Dobbs nuts.

But in general, there is enormous up-side in the Golden State and its powerhouses of innovation that are skating to where the puck is going to be.

It’s still a dream state. In fact, the pioneering megastate that gave us microchips, freeways, blue jeans, tax revolts, extreme sports, energy efficiency, health clubs, Google searches, Craigslist, iPhones and the Hollywood vision of success is still the cutting edge of the American future — economically, environmentally, demographically, culturally and maybe politically. It’s the greenest and most diverse state, the most globalized in general and most Asia-oriented in particular at a time when the world is heading in all those directions. It’s also an unparalleled engine of innovation, the mecca of high tech, biotech and now clean tech. In 2008, California’s wipeout economy attracted more venture capital than the rest of the nation combined. Somehow its supposedly hostile business climate has nurtured Google, Apple, Hewlett-Packard, Facebook, Twitter, Disney, Cisco, Intel, eBay, YouTube, MySpace, the Gap and countless other companies that drive the way we live.

Innovation implies the flourishing of  ideas that haven’t even been launched yet, defying the status quo.  It rewards early adopters and those who integrate technology in the most unlikely of ways.  Like Kogi, writes Grunwald, the Korean taco truck that announces its location via Twitter. “The beauty of California is the idea that you can reinvent yourself and do something totally creative,” says Kogi’s Roy Choi, a former chef at the Beverly Hilton. “It’s still the Wild West that way.”

But as forward leaning as the TIME Magazine piece on California is, it missed a chance to recognize that our schools have also evolved at light speed from the Fast Times at Ridgemont High.

When Grunwald celebrates the culture of innovation that produces breakthroughs in chip-industry, solar, LED lighting, green materials, the digitized grid, biotech, algae-to-fuel experiments, synthetic genomics, carbon-capturing-cement, sugar to diesel, semiconductors, and energy-efficient windows… he could have been a game changer himself… the first to recognize the relationship between innovative public schools and the fast companies they serve.  Instead, he states that California public schools “pose a real obstacle to the dream of upward mobility” and that they have been “deteriorating for years.”

Really? Deteriorating?  You are clearly thinking of Spicoli’s public schools.  Not mine!

California passed its charter law  in 1992, one of the first states in the country to do so.  There are now 750 charter schools serving 276,000 kids. 90 new charters opened in 2007 alone.  There are charters of every kind from High Tech High to El Milagro.  They flourish in a state that is unique for its size and diversity. Where 64% of its student population are children of color… third, only behind Washington DC and Hawaii.  A state where nearly half the students qualify for free or reduced lunch and where 1 out of 4 are English language learners.  A state that invests only $9,152 per student  (while New York invests  $15, 981 per student).  And where we don’t make excuses.

And while other states are relaxing their standards or lowering the cut point that determines grade level proficiency, California remains one of the most difficult states in America to test out at grade level.  The expectations here are sky high.

There are still many underperforming schools… but I don’t know where they are.  And if I did, I wouldn’t defend them.

I do know however, that schools like El Milagro continue to compete in an environment that is destined to change.  We will not be able to sustain schools as test prep academies to the exclusion of the real skills and talents that will feed into our innovative industries.  Solving energy and the riddles of biomedicine can not come from multiple choice tests.  The future demands creativity.  Critical Thinking. Resilience.

So you can be sure there are schools like mine, skating to where we envision the puck will be.  That’s California too.  Revolutionary thinking and the wild, wild west. 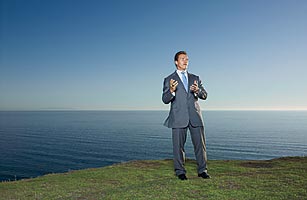