I don’t know where the bickering has taken the lawmakers on Capital Hill.  I don’t know if we are closer to a bill that begins to slake American’s out-of-control thirst for guns.  But I found this photograph from Education Week to be chilling:

These are educators in Clifton, Texas at a shooting range. The new professional development.

Does anyone honestly think armed teachers make our school safer?

I’m thinking about  the lockdown we experienced last year when some tweaker off the streets  jumped a fence and entered one of our classrooms with a knife in his hand.  I’m thinking about how many teachers I passed on my way out to confront him in the classroom.  The look in their eye.  The terror. I have no idea how many people might have been hurt if one of those panicked teachers had whipped out a gun (they would keep it locked up, right?)… managed to load it (locked in a safe, un-loaded, right?)… aimed it at the wild-eyed  intruder and commanded him to drop his weapon.  And of course he wouldn’t have complied any more than he complied with me when I offered to escort him off the campus.

So what do naive, common citizens do when they are armed to the teeth and staring down an stranger at their school and the whole episode does not seem to go according to the script from the “School Safety Plan” or the last tv show they watched that made it all look so easy and antiseptic.

What happens when a teacher kills an un-armed visitor who poses no real threat at all?

What happens when a teacher starts spraying bullets through classroom walls into areas where other kids have “ducked and covered”?

What happens when the intruder quits laughing long enough to take her weapon away from her– and now instead of being armed with a pen knife he is armed with that freaking gun?

The NRA has figured it out.  They know how Apple Computers benefitted from their partnership with schools (considerably more than schools benefitted!) and how the endless cycle of technology upgrades has affected their stock market fortunes. They see thousands of schools, millions of educators, and an endless stream of future customers sitting in desks learning about the Second Amendment of the Constitution. They see momentum building off of the Sandy Hook tragedy, and they want to ride it all the way to Wall Street. It’s a bull market.

They see pictures of entire school districts teambuilding out on the firing range. Target practice for God and country;  improving public education in the bargain.

Not me.  I still see that terrified look in our student’s faces as they ran out of that classroom, fleeing for their lives.  And the relief when it ended so quietly and peacefully.  No one hurt.

Nothing good will come from more guns in places where they don’t belong.  Just more red dots on the HP map depicting the number of gun deaths since Sandy Hook: 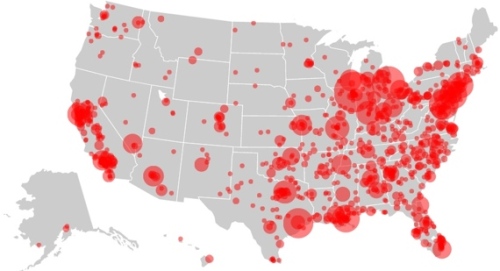