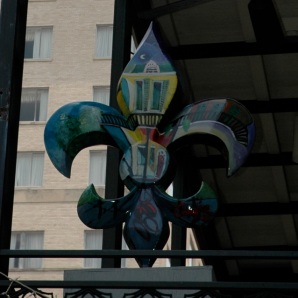 Spring Break just ended and I have now gone the longest I have ever gone between posts.  It is bad practice, no doubt,  to miss my weekly publishing day (which is normally Saturday!).  But I have a good excuse.

Anne and I have just returned from New Orleans where we volunteered for service with Habitat for Humanity and helped build homes in Musician’s Village. That is, we helped in the way that volunteers help when they have limited experience with actually building, using power tools, climbing ladders or hanging from roofs. But we helped.

And as always, the ambiance of New Orleans was amazing.

But so is the heartache. And so are the wonderings.

And so I wondered, 4 years after Katrina, why there are still hundreds (thousands?) of homes with holes in the roofs and boarded up windows and debris piled in the yard.

I wondered why so many  of those uninhabited houses still bore the crimson “X’s” spray-painted by search and rescue teams and framing the cryptic code for the number of  victims still inside.  And I wondered how those search tattoos worked on the psyche of children and adults alike.

I wondered why in some neighborhoods, all of the properties are restored, while in the poorer, more segregated neighborhoods, entire block are still abandoned. (Actually, I didn’t really “wonder “why this is happening at all.  These are the same people that were abandoned from the day the hurricane hit. They were left on bridges and rooftops and dumped into sports arenas.  And they still aren’t getting much help.)

So I wondered if the guy they keep trotting out as “the next Republican contender for president“, the governor of Louisiana, has been in the Lower Ninth Ward lately.  I wondered how you can approach the problems and challenges of the presidency if you can’t tend to the needs of your own community.

I wonder how many people moved back into homes that they shouldn’t have moved back into.  Homes where the walls are filled with mold and the cockroaches prop up rotting foundations on their backs.

I wondered why so many schools still aren’t operational yet and how much longer it is going to take.

But then again, I wonder what we can all learn from a resilient city that has bet the majority of its waterlogged educational system  on the promise of charter schools .

I wondered, with the return of so many musicians to New Orleans, could the city’s full revival be far behind?

And I wondered how the children are since Jazz Became Hope.