• a thing that rouses energy in something or someone; an interesting and exciting quality

On this, the thirty-day anniversary of the historic Inauguration of our 44th President, this much is clear: when it comes to leadership, Barack Obama has some game! In just four weeks (about the time it took most of us to figure out where the restroom was in our new school), President Obama has named and re-named cabinet members, passed a nearly $800 billion stimulus package, flown to Denver, Phoenix and Ottawa, launched Hillary into the Far East, visited a Washington DC charter school and took Michelle to dinner on Valentine’s Day. Whether you agree with his policies or not, there is much to learn from this president’s powerhouse approach to governing.

Metaphors for leadership abound– in Fortune 500 Company CEO’s, NBA basketball coaches, and admirals who have captained naval ships. You can find their books in Borders or read about them in Fast Company. Or you can follow CNN on Twitter and study how one man, our president, has approached his first month on the job and confronted the most complex and urgent crises of our generation.

So whatever your role in schools might be, here are “20 Leadership Lessons” from the dynamic presidency of Barack Obama:

1. Keep your eyes on the prize: There is nothing like a wordle to know you are consistently ‘on message’.

2. Invite them to the barbecue: Stepping outside of the hallowed halls helps to build social networks with allies and adversaries alike. “Kegger at the White House!”

3. Don’t wait: Hit the ground at a sprint and knock over the furniture. Launch and learn!

7. Be resilient: After the inevitable setbacks, betrayals, and disappointments… you have to bounce back stronger.

10. Don’t give up your Blackberry: Especially if it is your link to the only people who will tell you the truth.

11. Speak to the conflict: When you speak from the heart to the needs of people that didn’t vote for you, that’s real Servant Leadership.

12. Have some courage. Enough said.

13. Sneak out to dinner: (But leave your Blackberry at home.)

14. Change the culture to change the outcomes: Replace the curtains hung by your predecessor and then make up your own rules.

15. Stand tall on the shoulders of giants: Don’t wobble, they became giants for a reason.

16. Appreciate the ghosts. (If I lived in the White House I would walk around at night and listen to the spirits whisper.) Our schools have a history too.

17. Surround yourself with the best people you can find: Build your own team of rivals.

18. You belong in the room: So when you feel like you are over your head, it is good to remember that you were hired for a reason.

And finally, whether you are an urban school district superintendent, the assistant principal of a small elementary school, or the most powerful leader of the free world, one month on the job–

20. Remember that HOPE is what brought you here. 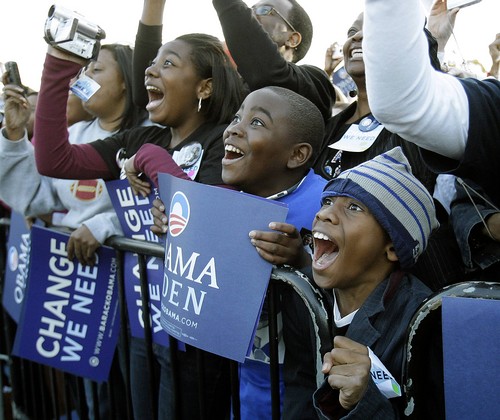 (Cross-posted at Leadertalk, a blogging community for school leaders hosted by Education Week.)